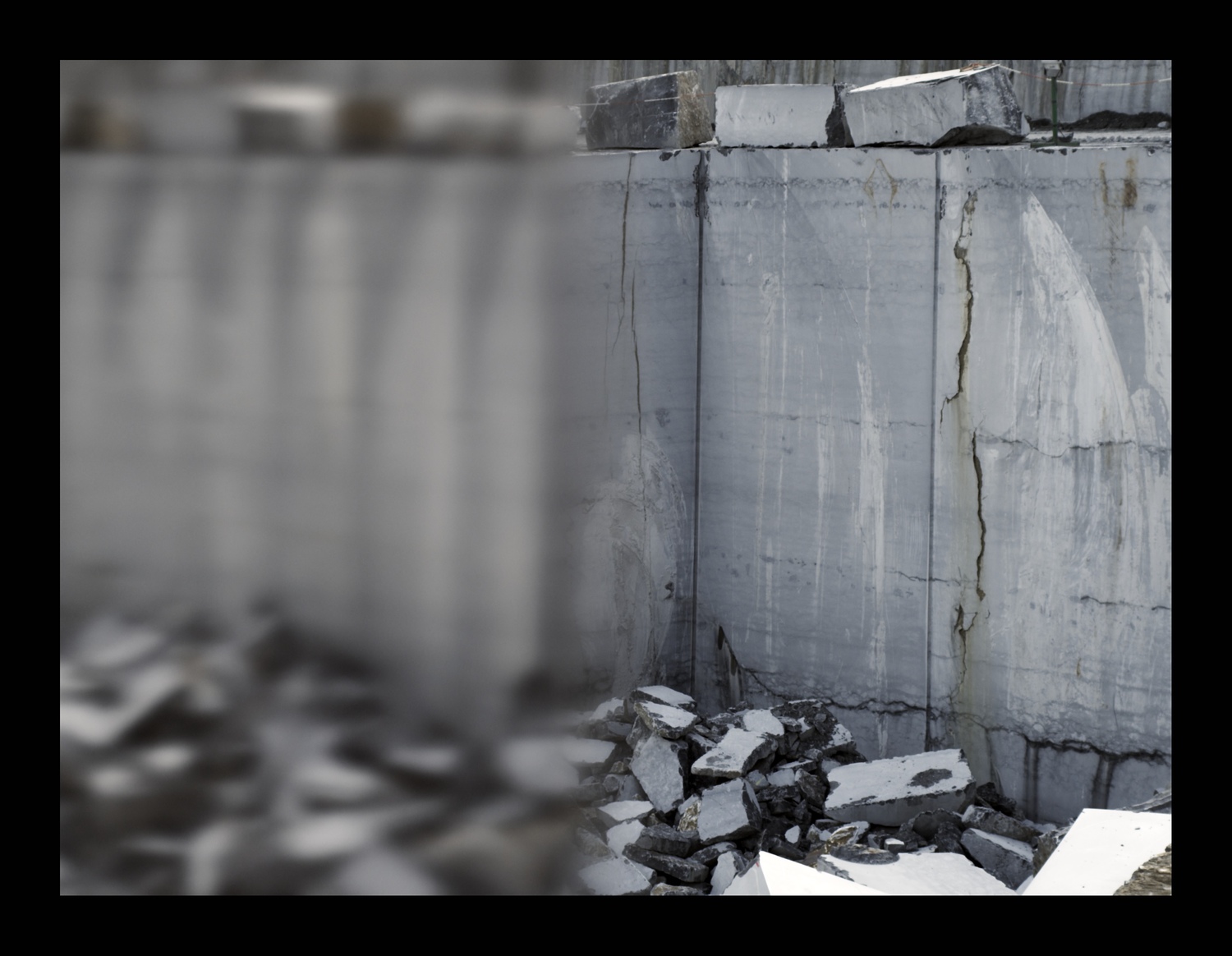 Consciousness is melting us all down together again – earth, air, fire and water, past and future, lobsters, butterflies, meteors, and men. As for me, what other force has driven me to attempt this book?

Ones mind and the earth are in a constant state of erosion, mental rivers wear away abstract banks, brainwaves undermine cliffs of thought, ideas decompose into stones of unknowing, and conceptual crystallisations break apart into deposits of gritty reason.

Robert Smithson, ‘A Sedimentation of the Mind: Earth Projects’

The feeling is that something terrible is on the tip of the earth’s wet tongue. This, the last of days, laps landward; it slobbers lasciviously over rock and sea bed, inserting itself into crannies, forcing invisible fissures in the rock to part.

Like a french seam, this horizon folds the future into itself, enclosing its raw frayed edges. Contact with eyes, you begin to think, picks at its stray threads. Now puckering in places, apricot clouds spill; they are caught like this for the barest moment, in the exhaled traces of a plunging sun.

But a dull blue-grey (the colour of death? or dread?) is set to return. Submerging the mass of peach coloured crabs, and other crustaceans cracked, picked, poked and sucked dry by boney hands and fleshy mouths.

Dread like this feels hefty and burdensome: it doesn’t fit through doorways; I struggle to bump it step by step up and down stairways; it tugs at the grip of my clenched fingers, straining white. It seems set to destroy. Really I should just embrace it. That’s what people say of situations that are uncomfortable or painful, isn’t it? Embrace the grief, the difficulty, the anxiety, the boredom, the embarrassment… What if, instead, we danced for dread? If we danced around it as you might a maypole, or a city bollard, or a concrete pillar. And while we skipped and sang and did handstands and cartwheels the rock of dread did not dissolve into compliancy but became, instead, even more still and solid, even more unfathomable (at least to my amateur mind).

I look at you repeatedly, imploringly. Looking for what? For reassurance, or validation? Despite my efforts, you stare back remotely, indifferently. But ‘(in principle) things outlast us, they know more about us than we know about them: they carry the experiences they have had with us inside them and are – in fact – the book of our history opened before us’.  So what I took to be your indifference is in fact your aged wisdom. Of all the things, then, rock must be the wisest. And the thing about the wise is that they are revered and so, unwittingly or otherwise, intimidate. The wise sit looking at us, at you, at me, with gravitas, their sober stillness magnifying our desperate efforts to impress. Keep talking. Keep moving.

Elsewhere, the severed tentacle of an octopus issues from a wicker basket – as might a dancing cobra – and sways. It continues, languidly, amongst houseplants, next to the deflated hairy urchin/anemone like creature whose filaments catch in the flow of water that is not there. The surrounding paraphernalia suggests a desk or an artists’ studio – a drill, a camera lens, a ruler, a box of tea; is this yours? – a rock hovers and rotates on its axis, and a laval-like flow pours impossibly up and over a model volcano. I bear witness to the examination of these specimens as they are studied and documented but also recreated and re-formed. Minerals and species alike are animated by computer software. I know it is not really real but virtually real which is really more real because someone, something, made it.

This reality is genetically modified; ‘intelligent assistants’ are rendered human and human voices, altered. Rocks grow skin and nerve endings. According to Agnieszka Kurant, ‘today, we know of no life form, nor any inert thing, that does not emit, receive, store, and process information’. Bacteria, rocks, stars they all compute in ways that are comparable. That is to say, they are more alike than our commonly received, hierarchical, conception of the universe would have us believe. This situation is unfinished, finishing, barely begun, above all corrupted.

We are taken to a quarry, the site of simultaneous destruction and construction, to watch the compression of rock through the heat induced expansion of sand – glass. But the longer we look, rock’s apparently inert obduracy begins to morph under the pressure of our sustained attention. Like metamorphic rock, the quarry is pressed upon with insistence: sliding foliates of transparent, coloured and frosted glass glide across our field of vision. We don’t see it, we don’t realise it’s happening at first not until, until, with some delay, the distortions drag upon seams in the rock, warping them in ways we know cannot be true. Though modified, filtered, it is nevertheless true.

These low-tech intrusions of colour and surface undulations, see the world of solid rock ooze, slipping across our retina – liquefying foci and depths of field – returning them to their molten prehistoric states. Rock travels like bodies and language and looks; Robert Smithson knew this too.

By way of a counter to rocks’ burdensome, slow moving, mass there are the scantest sculptural line drawings, described in conductive wire or optical fibre. Barely there, they appear dissolved by the air that surrounds them but also defines them. As three dimensional as a pencil drawing, they are outlines – air drawings of the slightest scrawl, slimline and impracticably balanced.

Shadows cast by light lend reassurance that the thing we think is there is there. Is the shadow more true than the thing we think? Are these air borne manifestations of thoughts themselves? The bare bones of thoughts; need we more? This. The word, leeches between my front teeth it is specific, it points to a definite something, but its sibilance runs on, escaping the contours and formation of my mouth dissipating uncertainly, indefinitely as it goes. This, the echoed geometry of eight corners delineates an area of air that seems more substantial than the solid paint splattered counterpart on which it rests. Despite their relative weightlessness, you see, the physics of these structures is weighty and exacting. Their immaterial presence is demanding, like assertions said softly and so lingering.

Augmented Geology presents six international artists whose works study the immaterial and physical possibilities of build environments and rocks. The exhibition brings together installations, video works and sculptures through the thematics of representations, speculative entities and hybrids. Augmented Geology explores the possibilities of recreating natural and solid materials. It questions how does the man-made technology affect the physical and social environment we live in.

The exhibition revolves around the concept of the rock cycle, the dynamic and often violent transitions through the geologic time. A voyage through Niamh O’Malley‘s quarries and monumental ruins leads us to Anna Estarriola‘s performance for a rock contemplating on mankind’s limited and helpless desires and attempts to embrace and conduct reality.

Lola Gonzalez‘ moments of synchronicity and bodily communication guide us to face outwards, towards the natural landscape, and to question is it only sound and fury, signifying nothing. Whereas Maggie Madden‘s collected materials accompany us to reflect on our spatial encounters in the urban landscape and the natural world. Watching Nabb+Teeri‘s imaginary minerals makes the raw-materiality surrounding humans corporeal, and substantiates the capitalistic dreams of exploitation leading to the end of resources.

As the rocks are forced to change as they encounter new environments, the exhibition opens a space for unpredictable and sometimes unwanted actions of human bodies, non-human creatures, and ecological systems.