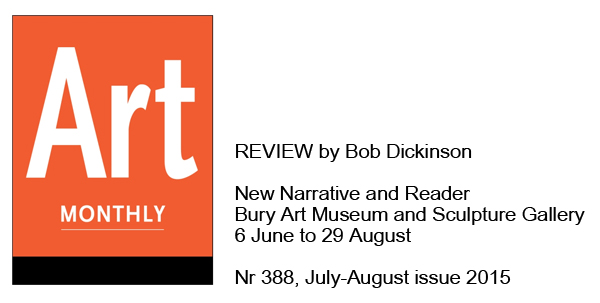 “When Laura Köönikkä, curator of ‘New Narrative and Reader’, first visited Bury Museum and Art Gallery, she noticed how reluctant some local visitors were to enter the contemporary art space, formerly part of Bury Public Library. Instead, she observed, they preferred to stay inside the rooms housing the gallery’s permanent collection of art from the 18th and 19th centuries. Now, in what is thought to be the biggest exhibition ever held in the UK of contemporary Finnish art, 15 young artists fill the contemporary space with work creating a library of different stories about art – mercifully without any dependence on explanatory text. But the show also springs a few surprises for those more conservative visitors among the well-loved work next door.

In the Sculpture Gallery, you are first confronted by Taneli Rautiainen’s Void, 2015, an installation of 154 orange, blue and white florescent tubes suspended horizontally and positioned to form a tunnel seen best from either end as a sort of explosion in perspective. Apart from the way the piece confidently takes ownership of its designated space, it also draws the viewer towards and inside it, recalling what you see travelling at night through traffic lights and other brightly lit road signals. Once you are within it, however, the strip-light surroundings feel surprisingly library-like, calm and quiet. 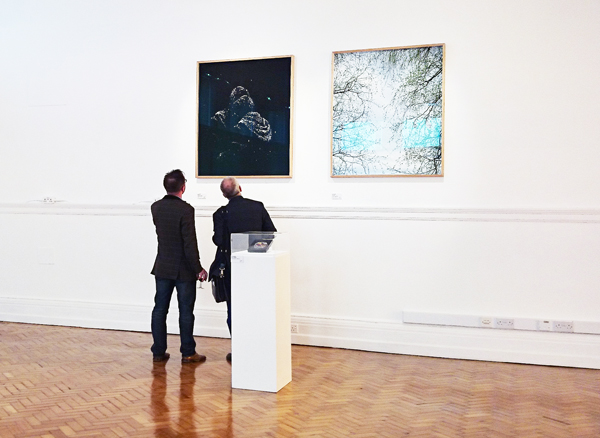 The importance of photography in Finnish contemporary art is well established. Here, Sami Parkkinen’s work discovers meaning in playful combinations. From his series ‘Father and Son’, a close-up view of multi-coloured plasticine blobs stuck to the face of an expensive watch by his young son, is titled How to Spend It, 2015, mimicking advertisers’ marketing of expensive timepieces. Arvi, 2015, observes the same son, a faraway look on his face, wearing dad’s high-collar coat which swamps him, making man and boy one being, albeit overwhelmed.

Sami Havia’s Doodle Series, 2015, is deceptive, and that is the point: from a distance these big paintings seem just as their title suggests – a group of giant looping abstracts in beige, blue and orange – but look closer at their loose lines and you see intricately detailed drawings of plant or tuber-like forms, evoking thoughts becoming manifest.

There are works that can literally be ‘read’, like Niina Martinsen’s hand-tufted rugs that reproduce in exact colourful detail graffiti ‘tags’ or autographs, based on originals that first appeared on walls and which were painted by people she knows personally, their initials supplying titles for the work on display: AIES, 2015, and EGS, 2013. But taken out of the urban, macho context where these images originated, a new dilemma appears for the viewer: to look or to go further, breaking the regulations, and touch? 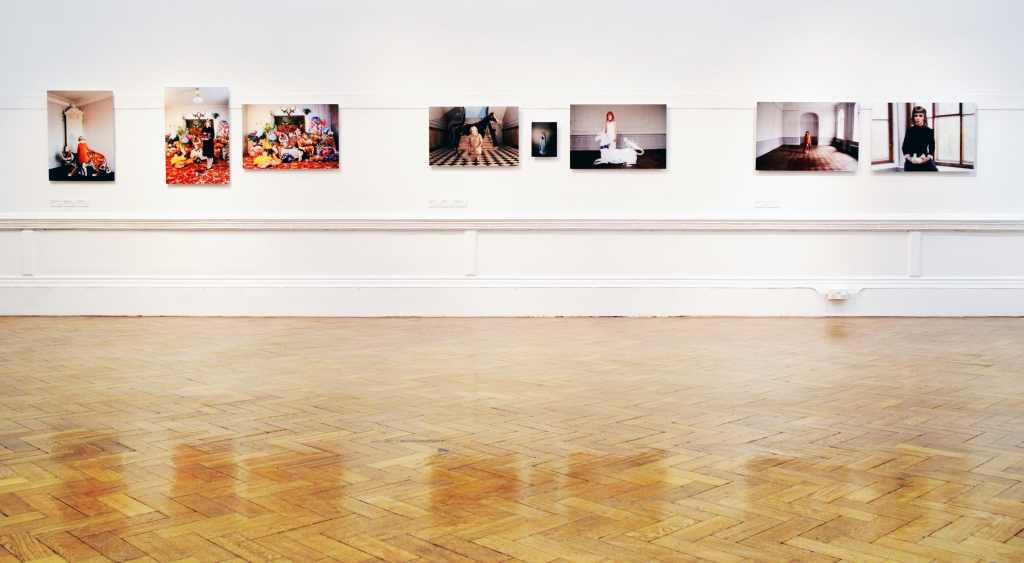 Three artists use set-building in the evolution of their work. Karoliina Paappa’s gaudily colourful photographs are of installations filled with bizarre objects and peopled with human models wearing doll-like masks. Laura Konttinen builds miniature film-studio scenarios as subjects for her otherworldly photographs, resembling snapshots of dreams, like The Day That Sank Into the Bottom of the Lake, 2012, and Lightmare Island, 2015. Meanwhile, for this show, painter Erno Enkenberg based his work on cardboard models carefully arranged and low-lit. Connected with defunct libraries, Rare Books, 2015, shows hardbacks in display cases, and Index, 2015, features empty filing cabinets. Their dark gradations of tone only reveal the subject matter after several moments of staring at them.

Also very dark, Tiina Pyykkinen’s paintings, Place Carrying Space 1 and 2, both 2015, layer high-sheen black gloss patterns over images of domestic scenes in velvety purple. These paintings become physical experiences because the viewer must move to see the multi-layered images, including their own reflection in the high-gloss surfaces. Meanwhile Loop, 2013-14, is a lively sculpture, similarly coloured and glossy, consisting of carefully positioned boxes tumbling, it seems, from a solid, static upright corner.

In the permanent collection, however, two young women in modern dress seem to have got stuck behind a pillar. On closer examination, they have physically merged. This is Pauliina Kaasalainen’s ‘as long as nothing happens between them, the memory is cursed with what hasn’t happened’ – Marguerite Duras, 2015, and the women are in fact fabrications made of wire and paper. The artist has previously produced installations using up to 30 female models disappearing into architectural details, which apparently provoked visitors to offer the victims help. 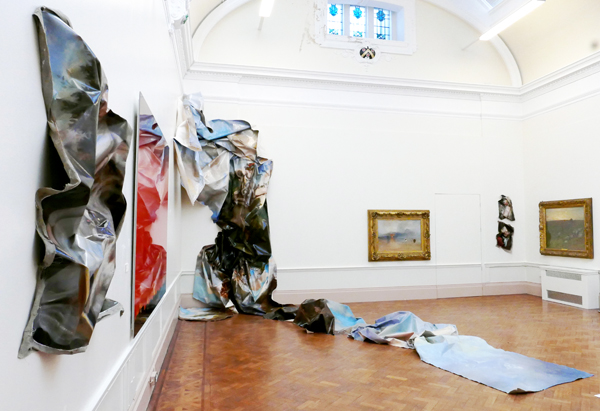 In this part of the show it is easy to misread what you are seeing. Staring up at one of Teemu Korpela’s unframed and deliberately crumpled classic oil paintings, one viewer on the show’s opening night asked me if I was not outraged by this way of treating an antique artwork. But the canvases on display are anything but antique; the very large From Enchantment, 2015, which drapes down from a wall and across part of the gallery floor, matches precisely the colours of Turner’s Calais Sands at Low Water: Poissards Collecting Bait, 1830, hanging nearby. Other portraits are stapled up between the Landseers and Constables. Even the most conservative visitor will be impressed by Korpela’s brushwork.

Also addressing artistic conservatism, Iran-born Bita Razavi’s film Some Critiques From Our Parents, 2015, is a series of interviews with mothers and fathers of Finnish contemporary artists, including Tero Nauha, Mimosa Pale and Minna Henriksson. In examining the way parents try instinctively to support the struggles of their offspring to survive and find an audience, Razavi gently reveals the traditional values of the artists’ immediate predecessors, who also happen to be their closest audience.”

BOB DICKINSON is a writer and broadcaster based in Manchester. 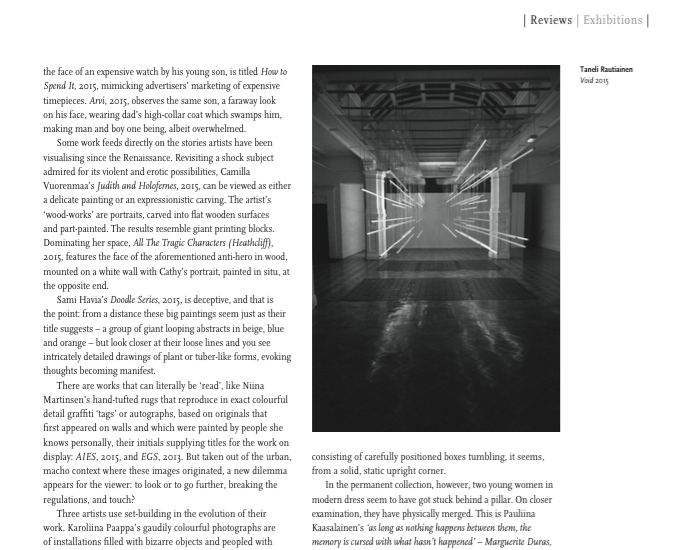 Art Monthly is the UK’s leading magazine of contemporary visual art. Published ten times a year, it keeps its readers in touch with today’s fast-moving art world through in-depth features, interviews with leading lights, profiles on rising stars and up-to-the-minute coverage of trends from independent critics.