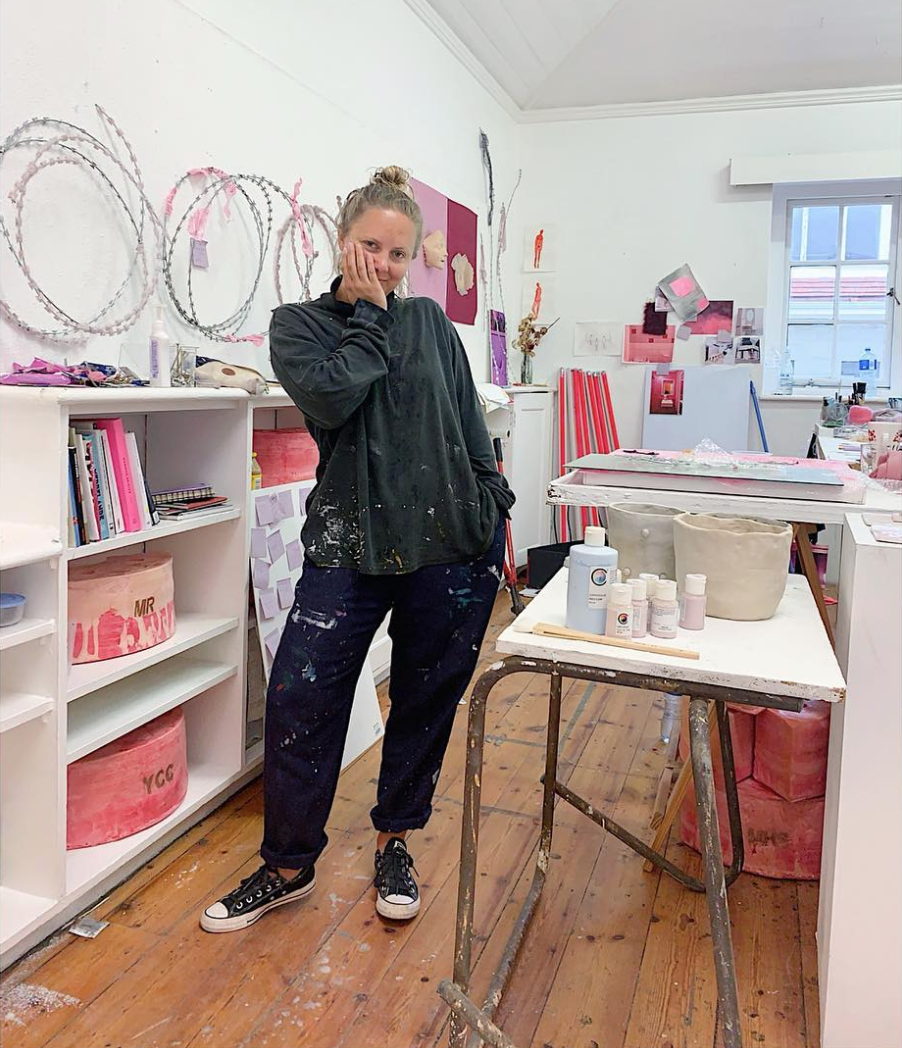 As part of 2022 SHIFT mentoring program FAA is interviewing all the participating artists. Part 1 is an interview with artist Isabella Chydenius who is currently based in Berlin.

Tell me about your background? How did you end up making art?

I’ve been making art in different forms for pretty much as long as I can remember. My mother is a painter, so I was naturally introduced to painting immediately when I could open my eyes. Back then she also took me to ceramic classes, and used me as a model in all sorts of body painting classes etc. It was a natural part of my life and how I learned to communicate.

For some reason, I still didn’t see art as a career or job option for when I “got old”, and thought I need to get one of those “normal” jobs with a regular salary. So, once the time came to choose what to study, I moved to Paris and did my BA in textiles. There, I thought, the Haute Couture approach at least had a sculptural aspect to it, as if making sculpture around the human form (which was a prominent theme in my artmaking since I was very young). After graduating, I moved to London and worked in the industry for almost 2 years, at Erdem, Vivienne Westwood and Jonathan Saunders fashion houses, before realising that it just wasn’t doing it for me and making me happy. So, in 2013 I returned to Fine Arts. Since I was living in London I got myself a couple of odd jobs while I started painting again as well as experimenting with collages. However, I realised quickly that the fashion industry had already lured me into loving 3 dimensional creationing; the movement of materials and bodies, selecting sound and curating space in terms of composition, flow and interpreting and translating different moods through light and other mediums.

I realised there was no way of turning my back on those elements and aspects, so I started experimenting with installations as well. Returning to the art world had its ups and downs, and I always felt like the fast-paced fashion industry with its flashy’ness is often looked down upon in the slower world of Fine Arts. Sometime after quitting fashion I remember thinking, I used to feel very much behind and like an impostor in the art world. But nowadays I’m grateful for my 5 years in fashion because it taught me so many things and contributed to my art practice to be exactly what it is today, which I’m enjoying to the fullest and proud of.

How do you describe the features of your artwork?

Currently, I work mostly with light and ripped clothes to make sculptures and installations. But as my art practice is conceptual / based on visual and academic research, I always go through an extensive process of choosing to work with materials that best communicate the ideas at hand.

About the research: My practice is informed by my artistic and academic research focused on (un)safety and a sense of belonging in urban nightclub culture in a heteropatriarchal time. Which I am meaning that I explore nightclubs as platforms that provide time-space for re-imagination of ‘Self’ and a collective agenda/empowerment, especially in terms of femininity and queerness, and challenging (heteropatriarchal) norms. One of my main arguments is drawing attention to how these spaces and the momentary feeling of freedom that they may provide, may serve as a catalyst for change in society, historically and today. I see club culture as a critical part of art history and am very happy that the German government acknowledged nightclubs as cultural institutions in May 2021. In my research, I also pair artists whose work is focused on the night, and parallel them with socio-political changes. Such examples include the photographers Billy Monk and Bill Bernstein who have been described to capture “a vibrant microcosm of social change” (Busha, N., 2015), or Henri Toulouse-Lautrec, who was an outcast in society because of his handicap but found solace in the frowned-upon red-light district in Paris. Toulouse-Lautrec painted, and Monk and Bernstein photographed the people who didn’t care for the conservative regulations of society at the time, and through their art practice seized the joy – away from the watching eyes of the day.

Personally, I moved away from Finland at the age of 19 in 2007 and have since lived in Paris, London, and Cape Town while spending a lot of time in LA, Johannesburg, and Berlin. I often moved alone, not knowing people in the cities I moved to for work or studies. But as I had been going to clubs since the age of 16, I once again ventured into the night and its clubs where I felt comfortable and at ease. That is where I found like-minded people who became new friends for life and chosen family – in the sweaty clubs of Pigalle in Paris, dingy dive bars in alternative (at the time) east London, and the after parties of LA.

In my art practice, I am therefore interested in the elements of possibility and the night as a romanticised space of otherworldliness, but also the threats of harm, especially as a woman or anyone who expresses femininity, queerness or “otherness” in a way or another. Finland is quite a safe country, but even there I’ve noticed attacks on people for having the courage to be themselves.

During this process of research and exploring nightclubs with a more observant eye, through photographing and making notes, I simultaneously became hyper-aware of the strong nuance of pink which I’ve titled Club Pink. The opposites of light and darkness are quite evident in the clubs as a medium, but as a metaphor and theory as well. Light, especially in different colours has the potential to set a mood, while darkness can serve as a hiding spot, but also a space for harm. While pink is a colour that I’ve avoided my whole life, now because of the topics of my research and the clubs, I couldn’t avoid it anymore and had to face it as a conceptual choice. It is undeniable in my works so let me tell you a little bit about that too.

I still struggle with it a bit, because of its connotations of girly-ness etc. When I was younger, I often felt like no one would take me seriously if I wore it. Through mainstream media, TV, and movies I quickly learnt that it is portrayed as a cute colour for silly girls and helplessness, which I didn’t want to be identified as. During my MFA, I started researching the recent western history of colour, its use in strengthening gender roles starting after WWII in the US, and how those ideas were spread through media and advertising. I also examined various studies and research on the colour’s effect on people, as well as how it in recent 20ish years is being reclaimed within feminist movements and issues relating to health, such as the breast cancer movement. The colour no doubt has a tricky history and has been used for and against gender equality, mostly in its lighter shades. So, when I observed this stronger hotter nuance of the colour pink in underground nightclubs and spaces that challenge heteropatriarchal norms and aim to foster togetherness within its agenda, I decided that I’ll use the stronger nuance as a metaphor for that agenda and its development. I’ve received really positive feedback from people who can relate to it when they see the colour, but am also grateful for the experiences when people feel challenged by it.

What or who is your inspiration?

The night and its clubs are my biggest inspiration. The people on and off the dance floors. Everyone who is finding the strength to venture out of their comfort zone, as well as anyone who finds peace with what they’ve been escaping. The idea and possibility of re-imagination and expression of self in these spaces, momentary feeling of freedom and collective empowered feeling. My work is informed by both personal and collected informal experiences, as well as the literature of all kinds. Especially Foucault’s theory of the Heterotopia of Deviation is quite applicable to my work with the clubs, among other philosophers and artists whose work aims to challenge norms and create space for similar ideas.

What are your new realizations since you’ve started the SHIFT program?

I’ve gained very valuable practical approaches to how to navigate the art world with its many different layered experiences.

What positive effect has the SHIFT program given you?

An additional support network with great conversations, both informative and one that helps build on confidence in terms of own positioning in the art world, and tools on how to navigate different situations.

Which artist’s career stage can make the most from the SHIFT program?

I think any stage really!

What are your future ambitions or dreams?

To continue my artistic practice on a full-time basis, be invited to participate in interesting curations and work with curators and institutions that care about bringing forward topics that I investigate through my own practice. A dream would be to exhibit at the Dokumenta in Kassel one day.