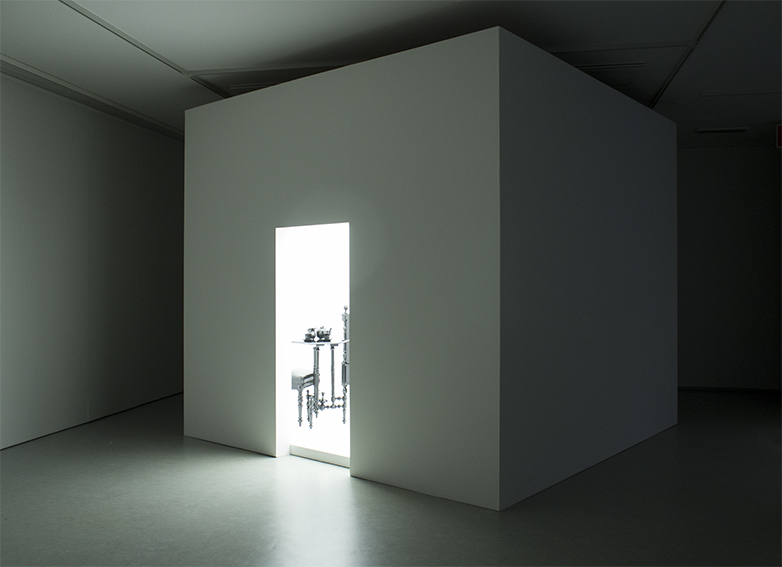 Welcome to the opening of the exhibition Mindset on Friday August 5th at 5–9pm!

Group exhibition Mindset by artists Anna Hyrkkänen and Tiina Pyykkinen opens to the public on August 6th 2016 at Galleria Forum Box, Helsinki. The latest artworks by the two artists portray themes of the perception of time and questions of memory, recollection and depiction of an experience.

Anna Hyrkkänen (b. 1979) is known for her spatial artworks, forms of sets or stages, where the audience member can enter. The atmosphere is often poetic and dreamlike, but yet at times weird or even threatening. Hyrkkänen combines different techniques and is noted for her realistic and supernatural installations.

The new works of Anna Hyrkkänen tell of a human being and human absence. The works are reflections on disappearance, transformation, re-organisation – on life and death. The black surfaces of her works represent the subconscious and a person’s innermost consciousness. The black surface turns the gaze inwards from which thoughts mirror reality. In turn, the reality mirrors material from the structures of the unconscious mind. The pieces of furniture and objects represent traces of human presence. Different realities and parallel worlds where time flows and circulates in a dreamlike state. In Hyrkkänen’s spatial art pieces reality and fiction, dream and waking state, intermingle. 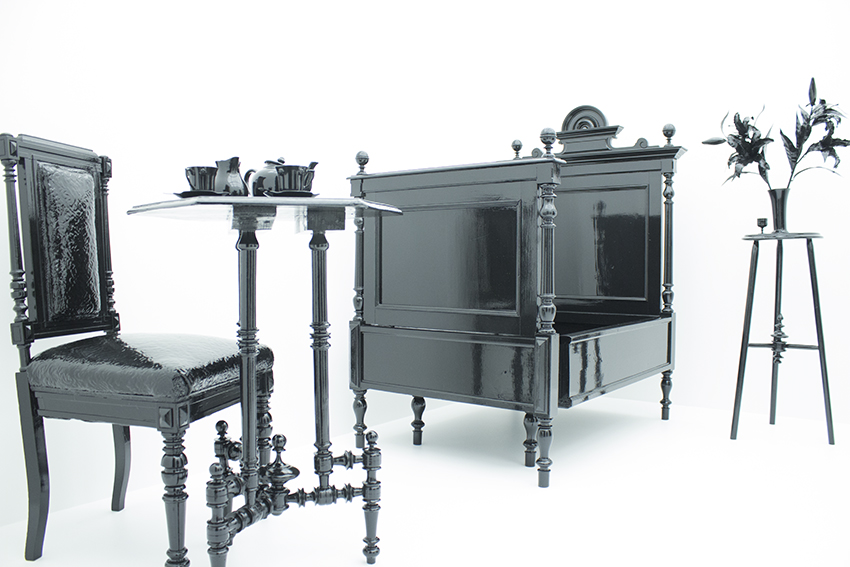 Visual artist Tiina Pyykkinen (b. 1983) is know for her ever-changing situational works that live by the different conditions of light and shadow, place and time. The works challenge the viewer to move in the exhibition space in which the colours, shapes and pictures reflected from the surfaces of the paintings appear and disappear according to one’s perception. Pyykkinen’s way of painting is almost expressionless. She fades out brush strikes and finishes the surface of the painting in a metal-like manner, causing the making process of the painting itself to vanish.

The exhibition at Galleria Forum Box includes a two-part painting installation Zeitgeist and an installation imitating a small room Silence has long shadows. Consisting of two standing paintings facing each other, Zeitgeist expresses the interaction between an experience and a depiction of an experience, which gets broken with a reflection of a viewer. Black paint turns to a lighter and purple to a multi-coloured surface when the paintings copy the colours of the exhibition space. Silence has long shadows resembles an overexposed photograph in a three-dimensional form. The white room is furnished with glossy black furniture, whose reflections sink into each other. When the viewer leaves the room, the rest of the gallery space seems darkened until the sight adjusts to the new lighting conditions.