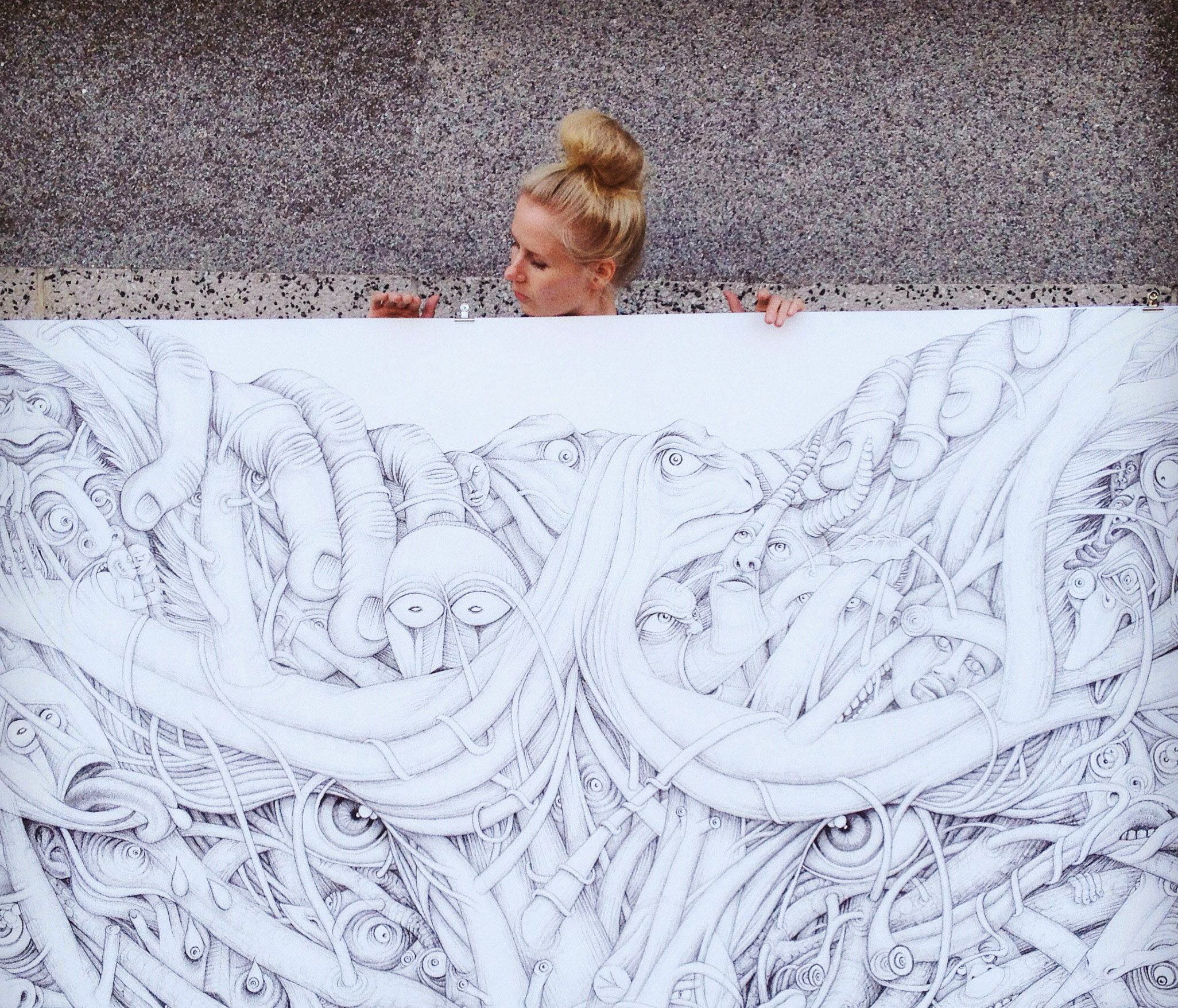 It has been a couple of months since the SHIFT mentoring program vol. 2 starter rolling. The participants have taken part in few workshops and one-to-one meetings. They have received good tips for writing about their artistic practice from professional writers such as journalist Venla Pystynen and essayist Max Ryynänen, as well some hints how to deal studio visit situations from curator Maija Kasvinen. Now Finnish Art Agency would like to introduce all the participants one by one, starting from artist Eeva Honkanen.

“I’ve found Pystynen’s and Kasvinen’s workshops very inspirational. I’ve felt that my artistic identity has intensified during these few meetings” Honkanen begins. “If it doesn’t make sense, then it’s true” describes Honkanen’s practice well. Although her artworks are often placed in an irrational world, their purpose is always to capture something human. “Before it didn’t feel so important to me to bring up the factors that influence the content and the style of my work. SHIFT meetings made me realise how seminal the information about the artist is to make the artwork more interesting” Honkanen explains.

For example, religious upbringing has strongly influenced the shaping of Honkanen’s controversial imagery. “Through drawing I was able as a child to free myself from the world in which I did not feel to belong, and to create parallel worlds of my own” Honkanen recollects. “At my grandparents’ house Coca-cola was considered a sinners drink, watching television was forbidden and one could only play hymns on the organs. In our family, religion passes on from generation to another. It took a long time to understand that the reality where my parents lived, was not the same as my own reality”.

Over the years, Honkanen has developed a personal drawing style, in which she typically combines ugly and beautiful, humorous and serious, living and lifeless. People, animals, machines, and their combinations are mixed into new realities. She often deals with topics of guilt and innocence. “In my works, the religious aspect is not clearly visible, but the exaggerating style is my way to deal with the internal conflicts. Large artworks are a counter reaction to all the restrictions I was constrained by throughout my life, restrictions I have turned into strengths. Although my past makes me reevaluate my place in the world again and again, I still feel it’s the biggest source of my inspiration” Honkanen expands. 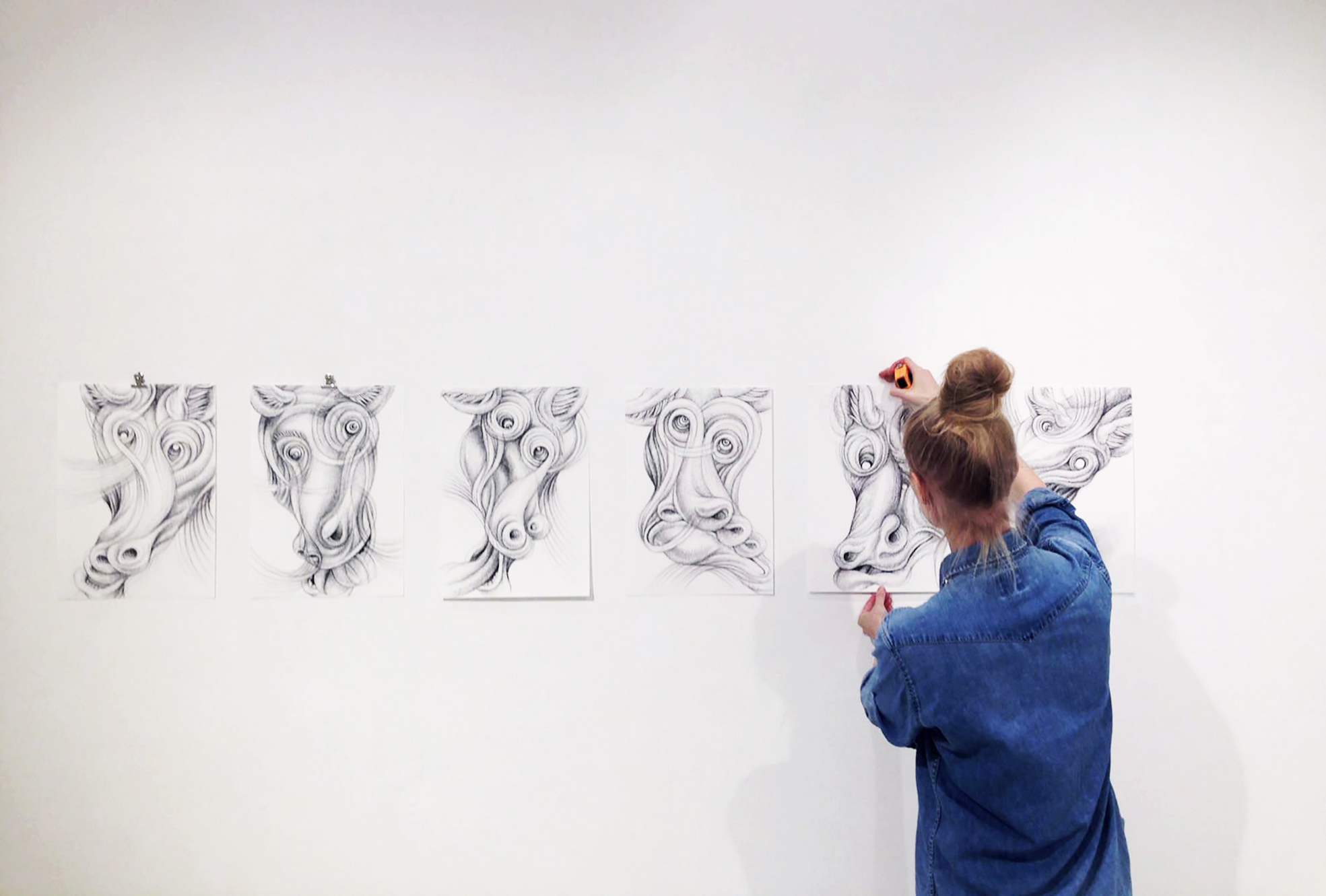 “Currently the program serves as both a mental and a practical support for my future projects” Honkanen describes. She wanted to participate in the program in order to find professional support for her artistic practice and develop her career in Finland and internationally. Honkanen felt lonely in her practice and without clear guidelines. “It’s important to see oneself from an outsider perspective and receive constructive feedback” Honkanen crystallizes.

Honkanen is now in a stage where she is looking for her place in the artworld. “I’ve long felt that I could look for higher ground for my art outside the borders of Finland, and meeting with Max Ryynänen gave me good perspectives. It’s important to be active and setting long-term goals are important when defining oneself as an artists”.

Currently Honkanen is hanging up works for the upcoming group exhibition Fender-Berder, clashes of drawings and paintings (29.6.–23.7.2016, opening Tue 28.6. at 17–19) together with Vesa Arjatsalo and Rose-Mari Torpo. In the exhibition, visual and substantive juxtapositions create realities that can be dynamic and unpredictable. Contradictions, contrasts and unexpected things attract attention, while stagnation and movement of time create tension and uncertainty of being. “In my own artworks I create images of uncertainty, trying to deal with the essence of humanity, freedom, fears and the uncontrollability of life. Butterfly effect is the underpinning of my drawings. Small changes can have massive ripple effects and even create chaos” Honkanen portrays.

Honkanen was also chosen to take part in a group exhibition ArtMap2016 in the oldest city of Portugal, Ponte de Lima. The exhibition runs from July 1st to August 30th with a theme Re-cognition: art as visual intelligence and spreads around the old town centre in various cultural historic buildings. In autumn, Honkanen will be taking part in Union of Finnish Art Associations’ annual exhibition in Haihatus, Joutsa, and in January 2017 she’ll travel to U.S. for her residency at Finnish Cultural Institute in New York. 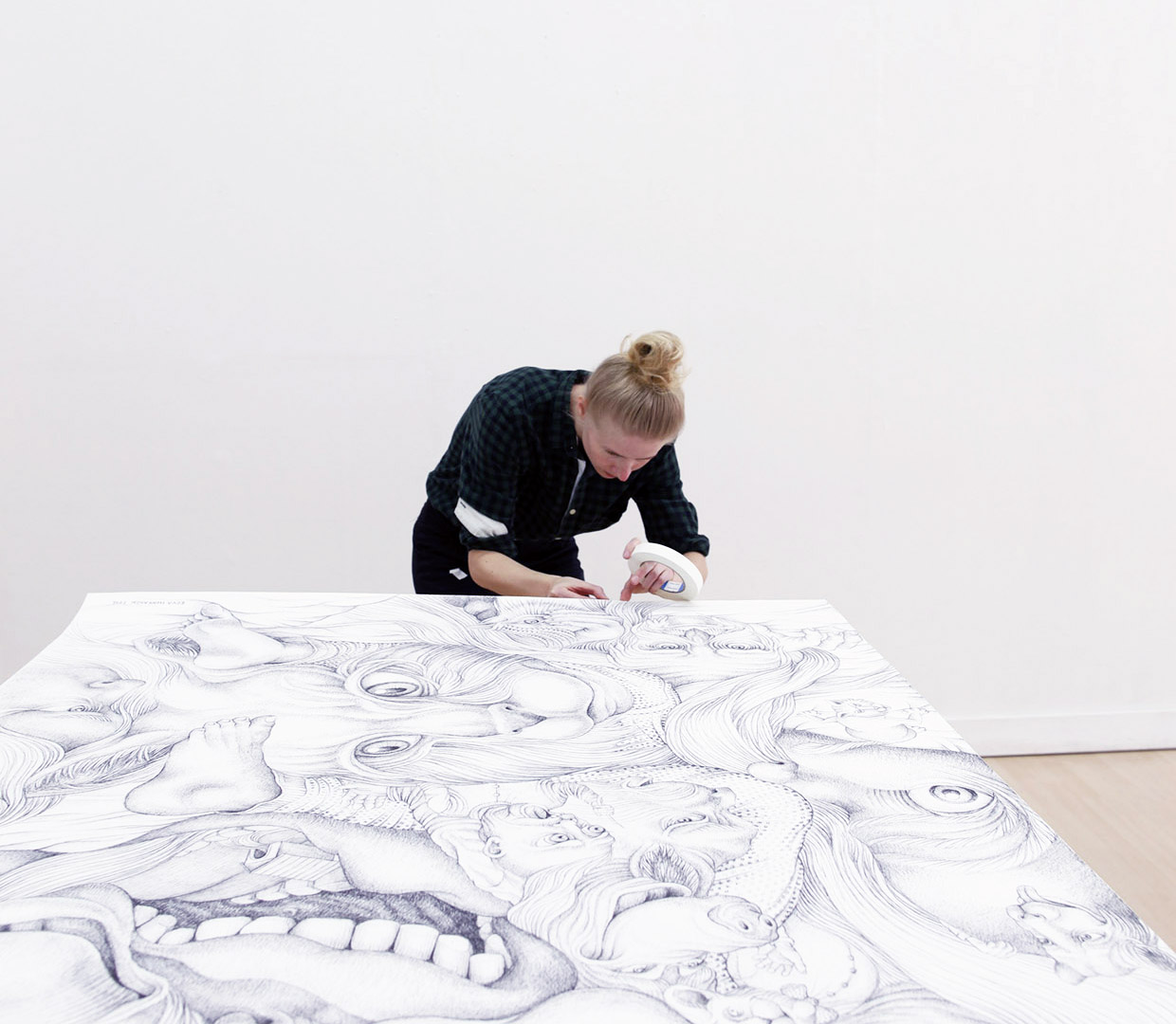 Photos from Honkanen’s previous exhibition hanging at Galleria Katariina, At the Fetish Market 2016