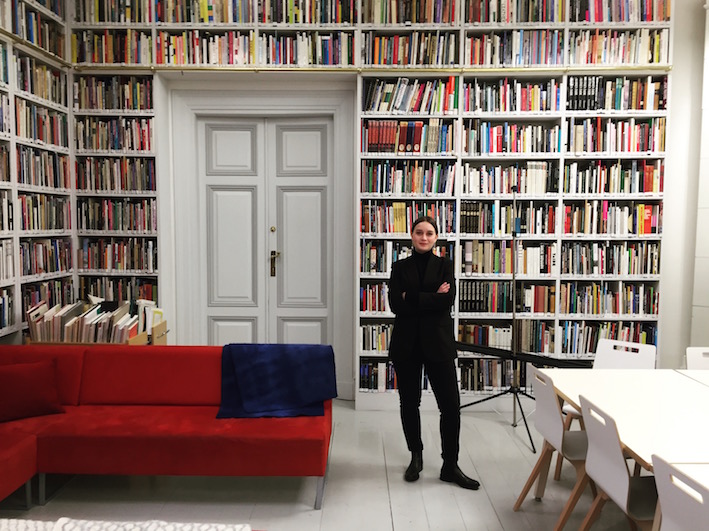 “I did not feel qualified to even study art history because I was afraid all the other students would know a lot more about art than I did, so I started studying philosophy instead.”

During her stay in Finland Ellen Klintenberg Gedda also got a brief art tour in Helsinki, which included few studio visits and artist meetings, organised by Finnish Art Agency. We interviewed Ellen about her relationship with arts and about her work as the assistant curator at the notable contemporary art museum and foundation Magasin III in Stockholm.

Tell us about your story with the arts:  How did it began and what kind of paths has it taken so far? Is there something in particular within the arts that keeps on inspiring you again and again?

I did not have immediate access to high culture growing up, but I have been fascinated by art for as long as I can remember. My interest increased when I moved to Stockholm about seven years ago and started to visit museums. However, when the time came for me to apply to the university, I did not feel qualified to even study art history because I was afraid all the other students would know a lot more about art than I did, so I started studying philosophy instead. A year later, I read an interview with a student at The International MA in Curating Art at Stockholm University. In the interview, the student was asked to advise others interested in the curatorial practice and she suggested, among other things, reading philosophy. That encouraged me to begin my art historical studies and it gave me an idea of a profession within the art field that I thought would suit me.  What inspires me with art is the way in which an artwork can make you absorb ideas, not just intellectually, but with your body, senses, emotions… The intellect alone is just not enough to grasp some things and sometimes, art can make you come closer to those things.

“My highlight moments have therefore, in many cases, been taken place at the external warehouse where the collection is stored.”

Describe your work as the assistant curator at Magasin III. What are your favourite bits and what have been the highlight moments for you so far?

Right now, since Magasin III is temporarily closed to the public, my main responsibility is to coordinate the work with a comprehensive publication about the institution’s thirty-year history. To do that is why I was hired in the first place after spending six months interning at the museum. Then, last year when the former assistant curator at Magasin III moved on to a new job, I got the opportunity to step in on the production of a large solo exhibition with the Swedish artist Gunnel Wåhlstrand, curated by David Neuman and Bronwyn Griffith. On that project, my role was simply to assist the curators with whatever needed to be done; keep contact with the lenders, planning transports, keep track of all information about each work, etc. I was also editor of the catalogue, which meant having contact with the designer, co-publisher, printing office and so on.

My favorite thing to do at work right now is the conversations I sometimes have with the curators where they tell me about projects they have made with different artists in the past. My task is to summarize their stories into texts which are then published together with images on the website. Also, every time we open a crate containing art, I get butterflies in my stomach. My highlight moments have therefore, in many cases, been taken place at the external warehouse where the collection is stored.

How would you summarize the function and the program of Magasin III? What kind of place does it have in the context of other fine art actors in Scandinavia/Europe/globally?

When Magasin III was founded in 1987, the idea was to fill a gap on the national art scene by providing the Swedish audience with the best in contemporary art. Influenced by the New York City art scene, the program then included several American artists previously not presented in Sweden. Since then, the national and international scene for contemporary art has changed and Magasin III has adapted to those changes. However, the core is still the same. Magasin III makes ambitious presentations of internationally established artists, often in uniquely close collaborations with those artists. The museum has a tradition of inviting exhibiting artists to create new works, not seldom on site in Stockholm, allowing them to experiment with their artistic practices.

Tell us about some current topics in the art field that interest you at the moment?

It is not really a current topic… In fact, it might be the oldest one in art history, but I have always thought a lot about the relationship between aesthetics and art. It continues to interest me.

After the trip here in Finland, we would love you her what’s your impression?

I am very happy I was invited to participate in the portfolio meetings in Kuopio. Meeting with so many artists, all based in various places in eastern Finland, was a great introduction to the region’s contemporary art scene. I returned to Stockholm with knowledge about the work of many artists that I previously did not know about. It really was a rewarding experience for me.

On my way to Kuopio, I had one productive day in Helsinki where I, besides visiting a few galleries, met with Niskanen & Salo at Kiasma to talk about their simple yet poetic work No Names (2016). Then I went to visit Taru Happonen in her studio. She gave me some keys to the world she creates, mostly for herself, in her paintings and drawings. The last appointment during my short but sweet, first ever, visit to Helsinki was with Sami Havia in his studio. I had already seen some works by him in Stockholm 2016 (at Fullersta Gård), so I was excited to see his latest paintings which turned out to be equally interesting. Earthy, rhythmic and playful.

Magasin III will open a satellite space in Jaffa, greater Tel Aviv, on January 20, 2018 with a solo exhibition by Israeli-born American artist Haim Steinbach The exhibition zerubbabel is Steinbach’s first solo show in Israel, and it marks the launch of a diverse program at Magasin III Jaffa that will feature both international and local artists. Read more about it.

Curator days in Kuopio was also the launch event of M_Itä! biennale which is a new biennale organised by the Eastern art museum in the region. The first biennale will be held in 2019.